How Did We Get Here? A Concise, Unvarnished Account of the History of the Relationship Between Indigenous Peoples and Canada 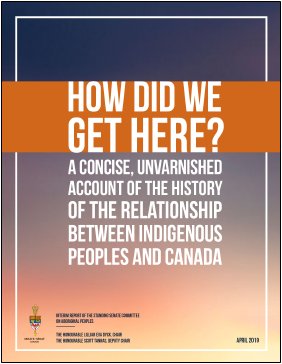 Building a new relationship between Indigenous peoples and Canada requires an understanding of our history, not just among academics and politicians, but among all the people who live in this country.

The Senate Committee on Aboriginal Peoples is studying the relationship between Indigenous peoples and Canada, with the intention of establishing what a new relationship might look like in the future. But before this work can take place — and to understand the nature of the current relationship — it is essential to take a frank look at how cruel and racist policies did incalculable damage to Indigenous peoples.

The committee’s interim report, How Did We Get Here? A concise, unvarnished account of the history of the relationship between Indigenous peoples and Canada, is the result of this work. It was released April 11, 2019 together with an easy-to-follow timeline that captures the key moments that led to this complicated relationship.

To promote a greater understanding of the history of this relationship, the committee will send copies of the report and timeline to ministers of education across the country. Committee members believe the timeline, in particular, will be a valuable learning tool for children of all ages and that it may assist in establishing a firm foundation for a new relationship.